Probably one of the best days I’ve had riding in Michigan, possibly one of the best ever, full stop.  We started out day two at the Dunewood Resort in Empire, and ended up at the foot of the Mackinaw Bridge, in Mackinaw City.  We took the road less traveled to be sure, M22 up around the Leelenau peninsula through Traverse City and Charlevoix and the road to Grand Traverse Lighthouse as well.  Then M22, to 119 (the Tunnel of Trees road.) 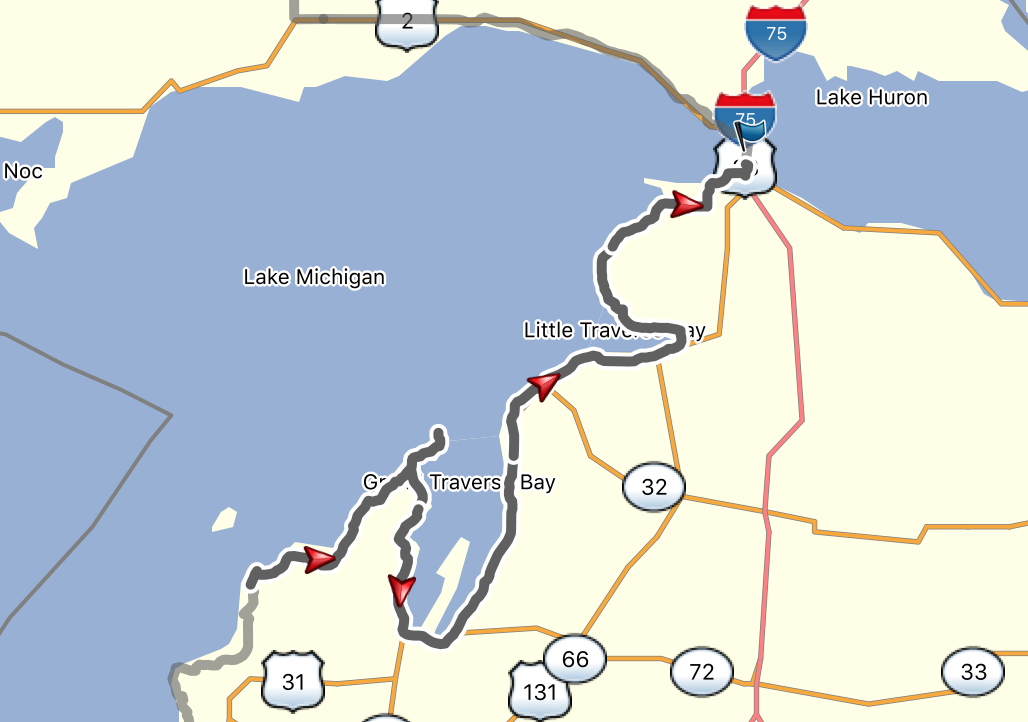 This some of the prettiest scenery in Michigan.  The roads wind through orchards and pastures, and the coastal towns along Lake Michigan here in the northern part of the state.  The tunnel road is lined with dense woods and homes, and you get to enjoy miles of dappled sunlight and pleasant (even challenging) curves.   It’s hard to know what to look at, if not the amazing blue waters of the lake, it’s the equally amazing coastal homes and communities.  But the one thing you HAVE to pay attention too is the traffic.  At some point I’ll post some of the ride videos, and it’s clear that there are a lot of tourists (of course we were among them!) and not everyone has their head in the game.

There is of course one thing that makes the adventure work, and it’s not the bike or the route or the destination (though they are important).  It’s the people you ride with.  My long-time friend and motorcycling adventure partner is Ulysses.  He blames me for his affliction when it comes to this particular bike, though he’s been a rider as long as I have been.  We’re both on the R1200GS Adventure from BMW.  It’s a great machine.  But having someone to ride with, that’s as agreeable and flexible (and as capable a rider) as my friend makes all the difference.

We like to plan the ride, but we realize that when it comes down to doing it, the plans sometimes don’t work out.  We both agreed not to push a lot of mileage each day and we’ll wind up where we wind up.  On our last ride we did 500+ mile days to keep the schedule and at the end of it we decided that we needed a more sane schedule.  I’m not up to par on this trip and I’m running out of steam fairly early in the evening.  So today we ended up in Mackinaw City.  We had a great dinner of fish and chips, and topped it off with ice cream.  The hotel is right across the street from the park at the foot of the bridge, so we got some good pictures there.  Tomorrow we’re over the bridge and to points north in the UP. 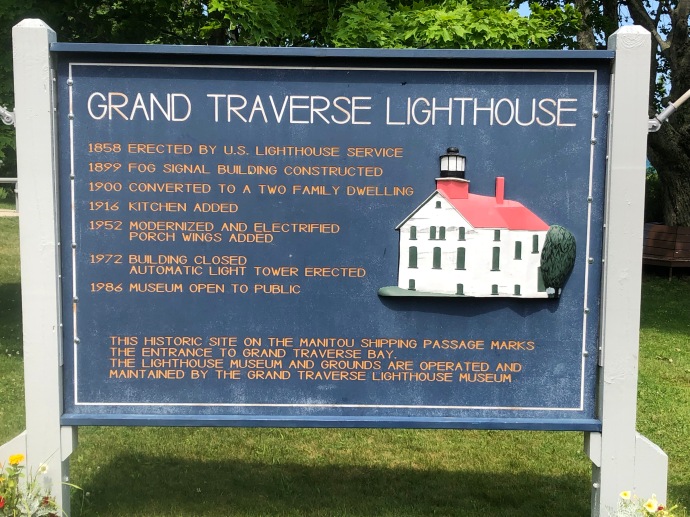 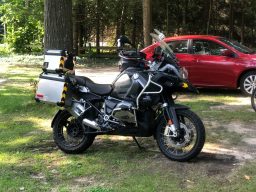 My long-time friend and I started a tradition last year.  Week-long motorcycle adventures; two riders, an interesting destination, and everything that comes in between.  Last year it was the Skyline, Shenandoah National Park, and New Orleans, Louisiana.  This year we are riding up the length of our home state, to it’s northernmost point, Copper Harbor.   We both live in the southern part of the lower peninsula of Michigan, and neither of us have been all the way to top of the upper (the UP!).  As a bonus, we’re going to ride down the shore of Lake Michigan on the Wisconsin side and take the car ferry back across to Michigan.

Day one saw us prepping gear, meeting up and taking US127 north and cutting across west to the town of Manistee to pick up the scenic M22 and ride the ‘Tunnel of Trees’.  This is a winding road that runs along the west coast of Michigan and is a popular destination in the fall.  If you time your trip just right, the trees are brilliant with reds, yellows and oranges, and it’s pretty spectacular.  They are all green and lush now, and the effect is pretty amazing as you wind through the curves, up and down the hills.

Mounting up after dinner at Joes Friendly Tavern

Our goal was to make it all the way through the M22 stretch and up around the Leelenau peninsula to Traverse City.  We got a little later start than planned and took more breaks. I’ve been a tad under the weather and my riding partner Ulysses was fatigued from rider coaching (insert plug for the Motorcycle Safety Foundation Basic Rider training course for new riders!) so we were done by the time we got to Empire, the little town next to Sleeping Bear Dunes, about 90 minutes shy of our destination.  We had excellent tavern burgers at Joe’s Friendly Tavern (highly recommended –try the Dip Burger if you’re really hungry) and layed up for the night at the Duneswood Resort.   So far the weather has been perfect (mid-70s) and the ride sublime. 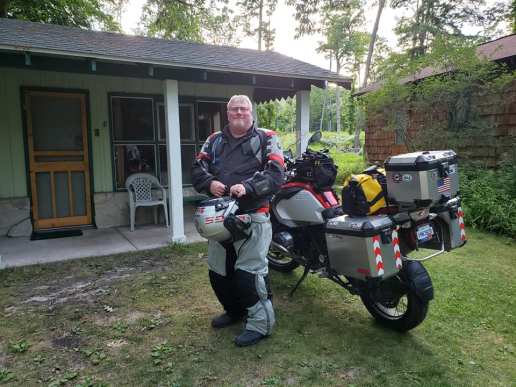 Wrapping up the day at the Duneswood Resort.